The evil twin of the Keystone XL oil pipeline 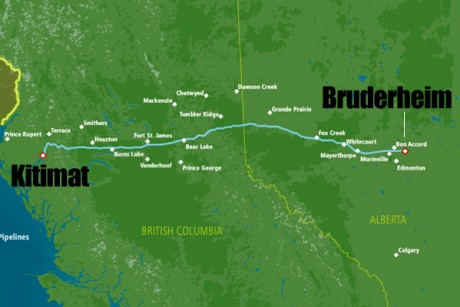 VANCOUVER, Canada – U.S. opponents of the proposed Keystone XL oil pipeline should take take note: One of the greatest weaknesses of the proposed 1,980 mile-long pipeline from Canada’s tar sand fields to refineries in Texas actually lies in British Columbia on Canada’s west coast.

That’s where a second pipeline (“Northern Gateway”) could link the tar sands of central Canada to coastal British Columbia. The U.S. State Department has accepted assertions that the production of heavy oil will increase regardless of whether Keystone XL is built, because the Northern Gateway pipeline would bring oil for shipment to China. Denying permission for Keystone XL would not promote the U.S. national interest in reducing greenhouse gas emissions, the State Department says, because China will use the energy anyway.

Canadians know better. Although the Canadian government supports Northern Gateway, and the government-appointed National Energy Board can be expected to approve, the same cannot be said of the First Nations (i.e. indigenous peoples) living along its path. The 731-mile long Northern Gateway pipeline would cross several mountain ranges and more than 1,000 rivers and streams, many of which contain sensitive salmon spawning beds. In December 2010, 61 First Nations from across British Columbia signed a declaration in opposition to Northern Gateway.

The First Nations are skeptical about safety assurances provided by Enbridge, the company behind Northern Gateway. In July 2010, a leak in one of the company’s pipelines in Michigan resulted in 20,000 gallons of crude oil spilling into the Kalamazoo River. A year later, more than 1,500 barrels leaked from another of Enbridge’s pipelines in Canada’s Northwest Territories.

John Ridsdale, the hereditary chief of the Wet’suwet’en First Nation in central British Columbia, says that Enbridge and the Canadian government would be committing “cultural genocide” if they proceeded with the project. “If you kill the water, you kill the land, you kill the plants, the animals, that’s how you kill a culture,” he told Canada’s Postmedia News. “You kill the culture, you kill the people.”

The Northern Gateway pipeline faces decades of litigation over indigenous rights before construction could begin. As former Canadian environment minister Jim Prentice told an Enbridge shareholder meeting in May 2011: “The reality on the ground is that the constitutional and legal position of the First Nations is very strong.”

In the 1970s, opposition from First Nations postponed a proposed natural gas pipeline in the Northwest Territories, initially for 10 years. Four decades later, the line still has not been built. In November 2010, Murray Edwards, the vice-chairman of Canadian Natural Resources Ltd., said securing the necessary consensus on the Northern Gateway project would be “just as challenging.” He described the proposal as “very, very difficult.”

As for the nonindigenous residents of British Columbia, they are among the most environmentally conscious people on Earth. This is where Greenpeace was born. This is where the first carbon tax in North America was introduced, and where the provincial Liberal government won reelection on a carbon tax platform.

Canadian environmental groups are fully engaged. After the BP blowout in the Gulf of Mexico in 2010, a coalition that included Greenpeace and the Sierra Club took out an advertisement in the Vancouver Sun newspaper that drew a direct parallel between that accident and what would inevitably happen if Northern Gateway went ahead.

Their concern is augmented by the fact that Northern Gateway would cut through the Great Bear Rain Forest, an environmental reserve designed to protect the “spirit bear” – a rare white version of the black bear.

Fully 80 percent of British Columbians oppose Northern Gateway, and that public opinion has translated into political opposition. All four opposition parties in the Canadian Parliament – who together won 60 percent of the vote in the last federal election – are opposed to Northern Gateway and support an oil tanker ban.

Another proposal, to expand the capacity of a 50-year-old conventional oil pipeline from Alberta to Vancouver and use it for tar sands oil, is likewise dead.

The current pipeline, named “Trans Mountain” and owned by Kinder Morgan, ends at a terminal in Vancouver’s upper harbor. The oil must be offloaded onto tankers there, then shipped through the “Second Narrows,” a shallow strait that is subject to strong tidal currents, and confined by the piers of a railway bridge. The Canadian Coast Guard has assigned the highest possible navigational hazard rating to the bridge.

Vancouver’s mayor, Gregor Robertson, who owns an organic fruit-juice company and was elected on a platform of bike lanes and backyard chicken coops, opposes the expansion of the Trans Mountain pipeline. Elizabeth May, the member of Parliament for the Southern Gulf Islands, along which oil tankers sailing out of Vancouver would necessarily pass, is the leader of Canada’s Green Party. Not surprising, she too is firmly opposed.

In short, there’s a bit of snake oil in the pipeline-to-China assumptions. The U.S. State Department must assess the full environmental impact of Keystone XL. It cannot ignore the carbon footprint of Canada’s tar sands because of an alternative pipeline to China that does not exist and will likely never be built.

Michael Byers holds the Canada Research Chair in Global Politics and International Law at the University of British Columbia. Prior to 2005, he was a Professor of Law at Duke University