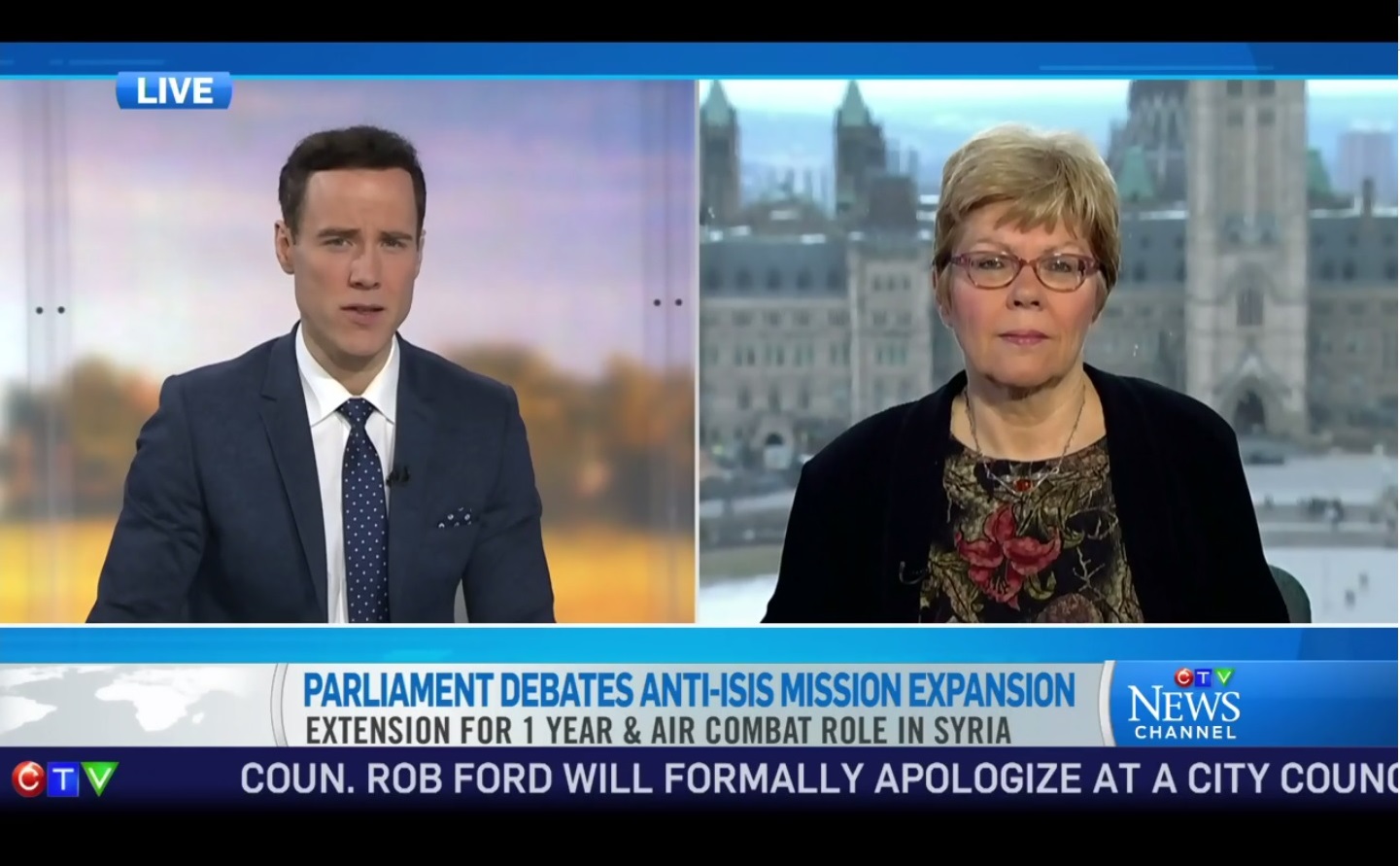 Peggy Mason, President of the Rideau Institute,  was interviewed on the extension and expansion of the Canadian military mission in Iraq and Syria on CTV News, hosted by Todd Van Der Heyden, on Thursday March, 30,2015.

Here’s the transcribed and edited text of the interview.

Let’s go to Ottawa now, Peggy Mason is my guest; she’s the President of the Rideau Institute and Canada’s former UN Ambassador for Disarmament. Peggy, good to have you on the program, and I want to get your take on this now. The government’s announcement that, as expected, they want to extend and expand this mission.

Well I have to say I’m rather surprised at the extension into Syria because it is so clearly not sanctioned under international law and it’s also not clear at all what our objectives would be by doing that.

Yes, Peggy let’s expand on that because some people might be confused over that, this idea that the Iraqi government formally asked for military help whereas in Syria it’s a much more chaotic situation, no formal help has been asked by the regime of Bashar Al Assad. So there are a lot of countries, including European allies who say we don’t have a legal mandate to go into Syria, this would be illegal.

Exactly, if we consider the situation with respect to Russia and the concern about Russia breaching the sovereignty of Ukraine and thereby breaching international law and all of the concern of this government and others over that. Then it would seem … very unwise for Canada to take the position we don’t really care about international law and that we will breach the sovereignty of Syria if we so wish.

There is also a practical aspect to this of course and that is, if we don’t have the agreement of the Assad regime, there’s a very real risk that we will be fired on by the Assad regime and in fact it’s widely believed that the United States, which ha[s] been carrying out airstrikes in Syria as well as Iraq for some time, that they are tacitly coordinating with the Assad regime. They might not be acknowledging it, but they must be doing this tacit coordination in order to avoid being fired on themselves.

So a very murky business, and why would we want to be doing this.

The Obama administration has notified the United Nations what they did in terms of Syria.  Is that enough?

[I]t’s an interpretation of international law that only the United States and Israel advance, no other country uses this rational, and it would be a terrible thing for a country like Canada –  which has played such an important role in building international law – to use a very dubious argument which in fact undermines international law.

Peggy Mason is the President of Rideau Institute. Great to get you on the program and share your perspective, thanks for this.